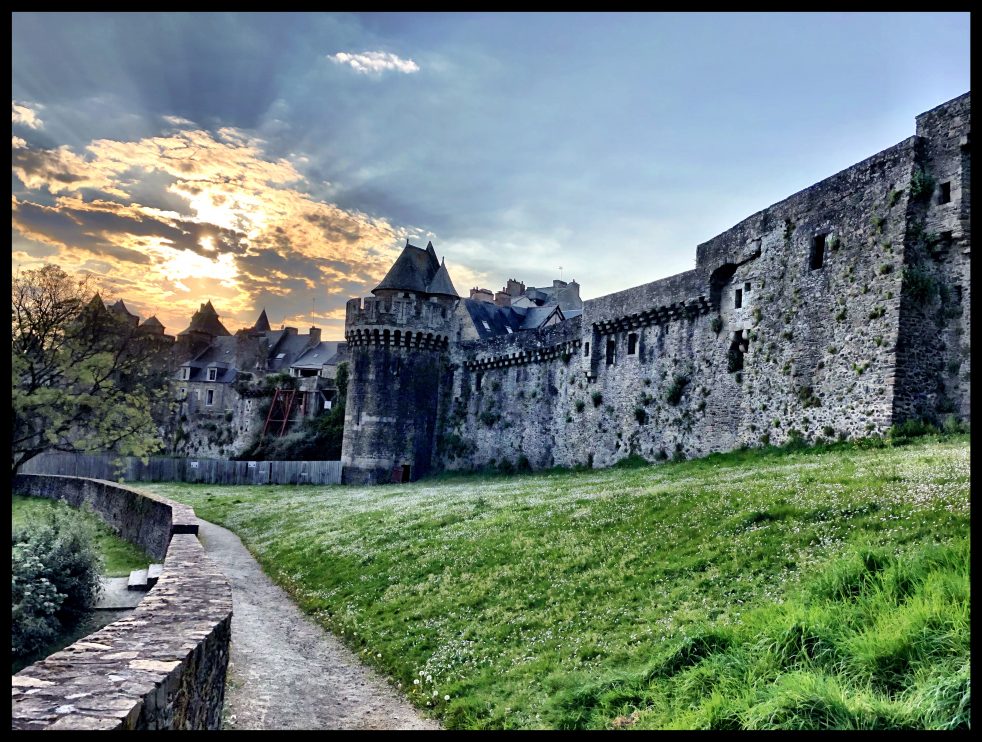 Sunday, Sunday. What to do? Cherie wisely suggested that we commence with a round of visits to towns around Fougères which have earned the accolade: Petites Cités de Caractère (small towns with character). Good idea! Besides, we had been working all week on the stone flooring of the laundry passage (buanderie). And we were feeling a little burned out. A little break is just what we needed. Or course, given that the pandemic is still running wild and most touristy things are closed, we held no illusions that we would be able to engage in a fully functioning visit. But, so what? For now, we can get a good look from the outside. Later, when the world has resumed some semblance of normality, we can return to see the inside stuff. It beats sitting around reading email.

Where to go? Cherie compiled a list of potential candidates and from that we chose Combourg. It’s a small town located to the west of Fougères, about a 50 minute drive from our house. After a quick breakfast [Editor’s note: breakfasts in the Kocan household are generally consumed between 11:00 and Noon. This might be part of the reason why progress on house projects is slow. A workday beginning anytime between Noon and 2:00 tends to produce rather limited results. Don’t judge us.] we piled on several layers of clothing and hit the road.

It’s a nice drive through countryside dominated by farms linked by small hamlets and villages. Hardly a soul was about, so we felt like we pretty much had the roads to ourselves. Sundays are generally very quiet in France. Especially in rural France. Very few businesses are open for even part of the day and there is a kind of solemnity that pervades the air. Sure, this Sunday silence has deep religious roots, but it feels more like a cultural tradition – just part of being French. Rolling into Combourg, we nodded to each other in recognition that tradition was well-regarded in this small town too. One older lady walking her belligerent little dog was all we saw for the first ten minutes after parking the car in the middle of town. It was like visiting a movie set a week after the last catering truck creaked off the lot.

The primary attraction in Combourg is the medieval château. Its origins go back to the 11th century, when the town was given by the bishop of Dol to his illegitimate brother. Quite a progressive family, eh? Anyway, the current appearance of the castle is thanks to the famed french architect Viollet-le-Duc who, in the last half of the 19th century mastered the restoration of this château, amongst many other icons of french architecture (Mont St. Michel, Carcassonne, Notre-Dame – you may have heard of these). The other claim to fame for the castle is that it was the boyhood home of François-René de Chateaubriand, the politician, diplomat, and father of french romantic literature. He was a rock-star of early 19th century France and beyond. Chateaubriand even traveled extensively throughout eastern North America and wrote a couple of books about these experiences. Somehow, being a royalist and staunch defender of the Catholic Church, he survived the revolution, having been wounded during a siege and spending the next eight poverty-stricken years in exile in England. Quite a guy. I have to confess that neither Cherie nor I have ever read any of his works. But we should do so. Even a biography of his life must be riveting. If any of you have any recommendations as to which of his books we should read, please leave a comment.

Despite what detractors of Viollet-le-Duc may say, the château in Combourg is beautiful. At least the exterior is. This being the hell-year of Covid and many other catastrophic events, the castle is closed to visits right now. We will definitely return for an inside look once the pandemic situation has been reversed. But, for this visit, we were content gaze in wonder at her beautiful parapets, turrets, embrasures, chimneys and pepperpot roofs. Even after all of the magnificent ruins, châteaux, stately homes, chapels, cathedrals, and neolithic monuments, we are still astonished each time we see another. The sheer historical weight of human experience encapsulated in these buildings is breathtaking. I tell you, time travel is a real thing. Just squint your eyes at one of these amazing witnesses to history, block out the modern world, and employ a bit of educated imagination and, voila!, you can step back in time.

The town grew up around the castle. The old center is quite pretty and includes some lovely architecture. The old Relais des Princes still stands and serves weary travelers just as it has done since the 16th century; it stood at the crossing of two royal roads (Fougères-Dinan and St. Malo-Renne) and therefore also served as an important inn for officials. Just around the corner there is another 16th century building (now with extra kitsch) which once belonged to the Order of the Knights Templar – given that the Order of the Temple was suppressed in the 14th century, one assumes there was an earlier structure on this site. For medieval architecture geeks like us, it was a pleasure to see so many ancient buildings still standing and functioning in the 21st century. A surprising number of hotels in the old town would seem to signal a fairly robust tourist trade under normal circumstances. Two large old hotels stand between the château and a lake. When we visited, things were very quiet indeed. But one can see just how beautiful and lively it could be during the high season.

Did I mention that it was a very cold and breezy day in Combourg? Well, it was. And by the time we had explored the area, we were quite chilled. And hungry. Normally, as I’ve mentioned, finding anything open after the 12 to 2 lunch hour(s) – on a Sunday – is impossible. But this town kindly offered the services of both a kebab restaurant and a boulangerie. Thank you François-René! – I’m sure the old romantic traveler’s spirit had some kind of influence on this exceptional surfeit of dining choices. In order not to play favorites, we purchased two kebabs (with sauce blanche et frites, for those interested) and then desert at the boulangerie. In very un-french manner, we ate our kebabs in the car. They were tasty but massive, as were the portions of fries. With a bravura worthy of James Beard, we charged our meals and took no prisoners. No, we’re not proud of it, but we’ll just a likely do it again some time. Soon, if I’m honest.

The visit was short. And it was really just a bit of a walk around the town. But it was a nice break. A validation of why we came to live here. With all of our energy being poured into the house, it’s good to be reminded that there is so much we want to see and experience in France. And Europe too. We’re eager to go everywhere and see as much as we can. Sometimes we get so caught up in our house that we forget. So, here’s to more travel, be it near or far. We will endeavor to do more of it in the coming months. When we do, you’ll see it reported here on: Finding our France (how’s that for marketing?).

One thought on “First Impressions: Combourg”